Burglary – On the morning of the 16th inst., between twelve and three o’clock, the house of Mr. John Fletcher, of the Lord Nelson Inn, Methley, was entered, and two hams, a piece of bacon, a quantity of groceries, and eight pints of rum were carried off.

A neighbour, who was going for the surgeon, on passing the house, observed one of the windows to be open, and called Mr. Fletcher up, when it was discovered the the above articles were gone.

Information was given to the constable, and during the day the greater part of the property was found secreted in an old drain. A watch was set, and at nine o’clock the same evening, three men went to the spot, to carry off their plunder, when an attempt was made to secure them, but only one was taken.

His name is Benjamin Goodair, and he is well known to be one of a gang which has long infested that neighbourhood. He was placed in the dock at the Wakefield Court House, on Monday last, and was remanded until next Monday. 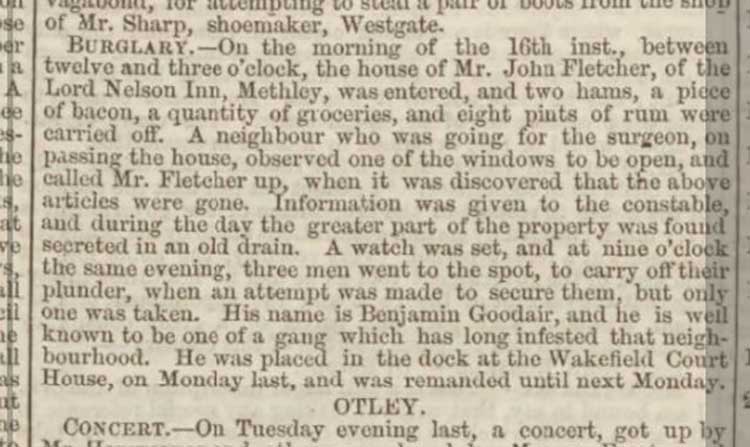 The Leeds Times ceased publication on 30 March 1901 when it was sold by the Yorkshire newspaper Company to Edward Baines & Sons Limited and absorbed into the Leeds Mercury Weekly Supplement.