West Riding Compensation Authority, sitting in Leeds yesterday, dealt with 23 licences referred to them for compensation by licensing Justices throughout the Riding.

They decided that all but one of the houses must go. The premises for which the licence will be renewed is the Craven Inn, Rawmarsh. This Inn was described by Inspector Marshall, of Rawmarsh, as being a very old place, which was dirty with age, although the tenant kept It as clean as he could having regard to the nature of the property. He said the house was “not fit for dog to live in.”

The Chairman of the Authority (Mr. A. J. Burley) said had seen the premises, and he did not agree with the inspector’s last remark. The Justices for that area had reported that the house was kept in a clean condition. The tenant, Mr. George Harry Green, said he objected to the inn being called dirty. As stated, the Authority decided to renew the licence.

Licences which were refused and set for compensation are:- 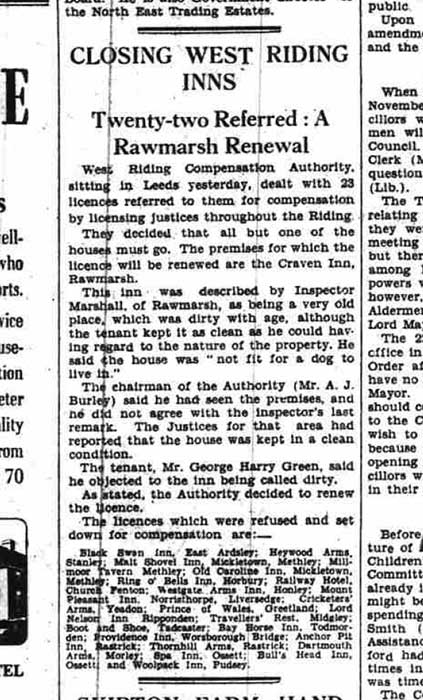