The funeral of Mr. Henry C. Embleton, Freeman of Leeds, and a well-known patron of the Leeds Choral Union, took place at Methley church in the presence of a large gathering of mourners yesterday. A memorial service was held at Leeds Parish Church.

Dr. Lucius Smith, the Bishop of Knaresborough and Rector of Methley, assisted by the Rev. T. Hatfield (assistant curate), the Rev. H. W. Ellwood (vicar of St. Chad’s, Gateshead) and the Rev. J- J. C. Coen (assistant priest at St, Chad’s) conducted the service at Methley. Dr. Smith paid tribute to the fine way which Mr. Embleton had administered the gifts with which he had been entrusted.

There were those present who would think of him as a great patron of music. They all knew how earnestly he endeavoured to make others sharers in that gift, sparing neither time nor effort in his generosity to that end. 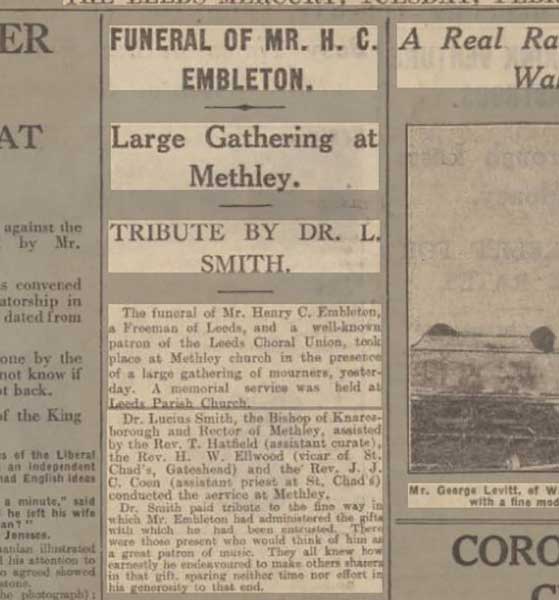