During my recent trawl through the newspaper archives on the look out for interesting articles for this website, I came across a piece regarding the first student of the Yorkshire College in 1874 (now the University of Leeds). The story appeared in the Leeds Mercury on Monday 26 October 1925 and was penned by a Mr T.R Dawes from Castleford.

Interestingly, on the Timeline of Leeds University, this is the first entry, although no other details are given. View the timeline here >>

The first student of the Yorkshire College was Shadrach Stephenson, a miner. One of his textbooks, signed by him, is in the University archive.

by T.R. Dawes
Headmaster of the Castleford Secondary School. President of the Leeds Histrical Association.

“It is said that when the College first opened its doors, a solitary student, a coal miner, appeared on the first day. He continued in splendid isolation for forty-eight hours, when, much, I imagine, to his relief, he was joined by a second.”

These words from the Duke of York at the great meeting for the University Appeal Fund made, I think, a great impression on the vast audience, and I am sure that some further particulars about this first student will be of interest.

I will confess that I hoped it would prove that this first student was from my own town of Castleford, for local patriotism is strong in Yorkshire, and Castleford would have been proud to secure this feather for its cap. It turns out, however, that though he is not a Castleford man, he is at least from our district. The village of Methley has the honour.

Shadrach Stephenson, of Methley, was the man who entered the College doors in 1874, and as the Duke stated, was for forty-eight hours the only student.

A Search at Methley

The College records of early days are rather scanty. Although I got every help from the Vice-Chancellor, the Registrar, and others at the University, I could learn little about the Duke’s miner. So I set off to Methley to investigate. Stephenson was twenty-four when he entered the College. If alive he would now be seventy-five.

My first visit was to the Rector of Methley (the Bishop of Knaresborough). He fired up at once. He hunted through the baptismal registers for 1850, ‘5l, ’62, ’53, but though he found some Stephensons, there was no Shadrach. These things take time, and I had to insist that the Bishop should not allow me to interrupt his own work any longer. I went into the church, and here two Methley miners joined in our search. Had they ever heard of Shadrach Stephenson, a Methley miner, who, if alive, must now be about seventy-five? That must be Old Shed,’ said one. died some years back.”

Here the sexton joined in. His brother Amos is buried in our churchyard, but Old Shed died in Nottinghamshire.” In short time we had got hold of Mr. Bransby Fisher, a vigorous old Methley man who had known Shadrach Stephenson. Mr. Fisher is now eighty-four, but keen and vigorous, and might pass for a young seventy.

Some particulars from him sent us on Crossgates, where we found Mrs. Wood, a daughter of Shadrach Stephenson. There our quest ended, for Mrs Wood was delighted to tell us all about her father, who was certainly a very remarkable man, and one whose life may well serve as an inspiration to University students.

Shadrach Stephenson was always a hard worker worked hard in the mine, studied his books in the evening, got lessons when could find teacher.

On Sundays he was a regular attendant at the Free Church, and was a local preacher (no wonder he does not appear in the church register).

It was largely owing to encouragement from his mother that he entered as a science student at the college, where he stayed two years. Of all the Professors of whom he spoke in after life, he referred most often to Professor Miall, who seems to have greatly influenced him.

His college work helped him to become a manager at Bowers Pit, near Allerton-Byewater. He had ten children, all of whom are living. They attended the Bowers Allerton School, and I think all went on to the Leeds Central High School.

All the family have made good. One son is with an acetylene company in London; one is in Australia. They have all been interested rather in science and industry rather than in letters. Mrs. Wood, who gave me the above particulars, teaches at Bowers School. Her husband is a master at the Central High School, Leeds. 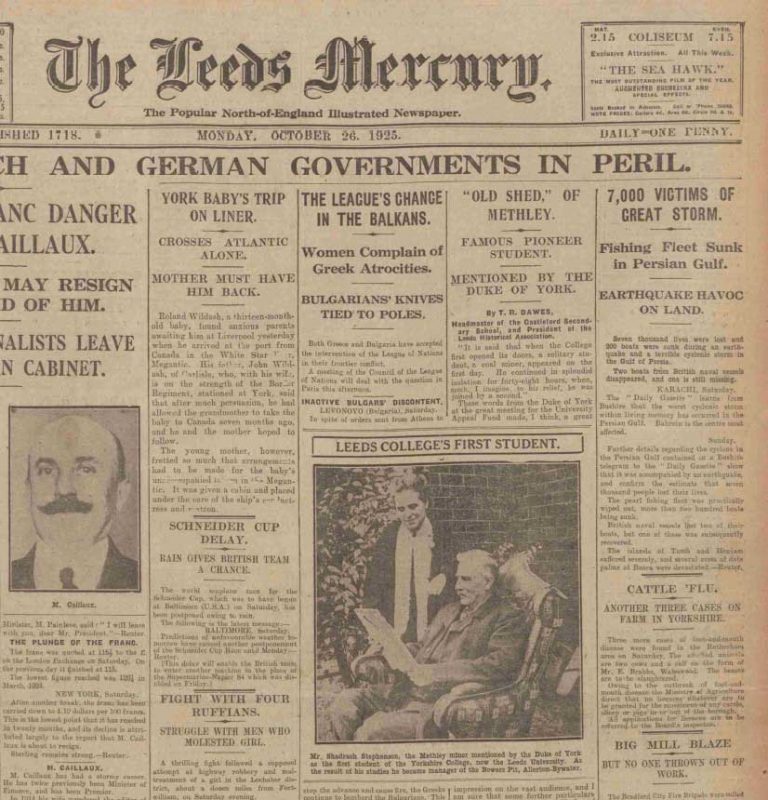