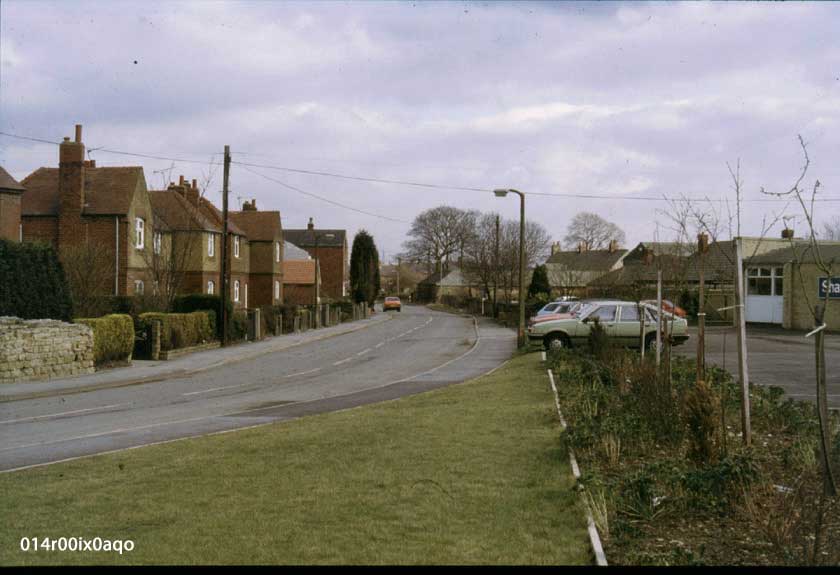 On the left are the council built houses of South View, erected 1925-6. Just below these, standing back further from the road and so hidden from view is a pair of dormer-windowed houses, built on the site of an earlier single-storey stone building, Frog Hall.

The red-roofed bungalow is on the site of some demolished houses of Waide’s Buildings. The tall building beyond is an original house and shop at the top of Cutler Lane, for many years Mrs. Whittlestone’s Shoe Shop, and later a cobbler’s (Atacks), and then a hairdresser’s. Now it is a private house. Between the new bungalow and this tall house, the gable of two original cottages is visible; these are now refurbished and renovated.

Tall trees are in front of new private houses built on the site of Pollard’s Row and Pollard House. Pollard’s Row stood directly on the pavement and was made up of very old cottages, with a step down to enter them. Pollard House was at the end of the Row and stood at an angle to the main Lower Mickletown Road.

Across the row, in the distance are just visible the houses of Greenfield Terrace; next is the roof and gable of White House Farmhouse and the farm buildings in front, then the newer bungalows and in the immediate front the car park of what was Shand – Civil Engineers, later Taylor Woodrow. This is now a private estate.

Various village buildings have stood on the Shand site and many village activities centred here. In the early 1900s, travelling feasts and circuses pitched here and set up their performance tent, – George Garrett Theatre until 1912 and Harry Ashington Shows up to 1911 (though they maybe then shared the site with village buildings). These shows made twice yearly visits and one circus visit, and so they say, brought a typhoid epidemic and several Methley people contracted the illness, in some cases with fatal results.

On this site Methley Band Hall opened 21st April, 1905; then the Picture House (opened Saturday, 9th November,1912) ; and then the Skating Rink in the early 1920s – all wooden buildings. This wooden building later became Shand Workshops. The Picture House had a few plush seats at the rear, but most seats were the cheaper bench type. Electricity for the projector was provided by a generator driven by a gas engine.

Viewing was often interrupted when the gas engine failed to work, resulting in noisy interludes particularly when children were there. Saturday matinees were very popular with children, who often received a present of an orange or a comic. The films were silent black and white films. The skating rink only lasted a short time. In the 1930s the Methley Branch of the British Legion had their club headquarters on the site.

There was Shaw’s Engineering Firm in the 1950s and later Savile Transport offices and garages, owned by Mr. Arthur Marsh. Now the house of The Firs stand on the site.