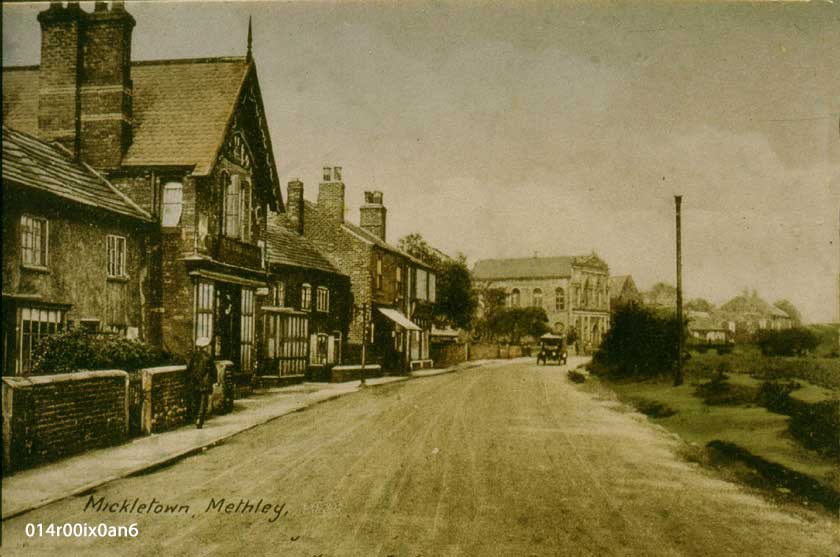 Main Street, looking from the Miner's Welfare towards Pinfold Lane.

The Welfare is not on the photo. There is only one car, a Model T Ford. This lone car and the rough road surface indicate how little traffic there was at that time. On the right is wasteground and allotments from the Welfare to Pinfold Lane.

On the left front are old cottages, demolished about 1960-63, and then the entrance to a car repair workshop. Numbers 40 and 42 Main Street are just off the photo.

The high-gabled house standing at the top of Holmes’ Yard was Misses S. and E. Radcliffe’s Bakers and Confectioners, a well-remembered village shop. The property was built in 1863 by Mr. John Holmes, who lived at Holmville, Little Church Lane.

On each side of the upper window is a plaque, that on the left (as you face the building) bears the initials J.I.H. and the right hand one has the date 1863. The two maiden Misses Radcliffe, later joined and succeeded by their niece, Miss Edna Radcliffe,lived behind and above the shop; the basement cellar was their bakehouse. The quite large shop had a corner door facing down Main Street and a large shop window, shuttered at night facing Main Street. Often children would sit on the wide wooden sill of the window. Under the window was the bakehouse window and a metal grate overing the ‘well’ of the window. Children’s pennies often dropped down here, much to their distress, when they were peering into the window. It was warm above the cellar grate and the smell of newly baked bread and confectionary was very attractive.

There were 14 houses in Holmes’ Yard, the land being conveyed to John Holmes on 20th August, 1862. The houses were sold to Mexborough’s in 1891. The box-shaped shop window of the property at the other side of Holmes’ Yard was that of Francis Crewe, Gents Outfitters, a small shop. People went down a step to enter the side door. It was later Mr. Longbottom’s and then Mr Fox’s electrical shop.

The very old low cottage with its very low boundary wall was a private residence (site shown on 1786 map). Older cottages stood behind here. There were two shops in the taller building beyond, Mickletown Post Office (where the over-hanging sun blinds protect the goods in the window), was managed by Mrs. Dickinson (1898) and beyond was the Methley Branch of the Castleford Co-operative Society, a large grocery store, well patronised by village housewives. Land for this store was conveyed in 1898. (In 1875-76 the Co-operative Store was here, house and shop – the proprietor and occupier was Michael Stephenson).
There is a tree, the stone wall of Hunt’s Farm, small trees in front of Rose Cottages, the Wesleyan Methodist Chapel, and the gable beyond of Mrs. Crewe’s draper’s shop, mother of Francis Crewe.

The low building beyond, at the bottom of Pit Lane, was Braime’s butcher’s shop and family house, then, at the rear of the picture is the gable of Red House. Red House was Methley Urban District Council Offices and home of the Council Surveyor, for many years Mr. Tommy Thompson.