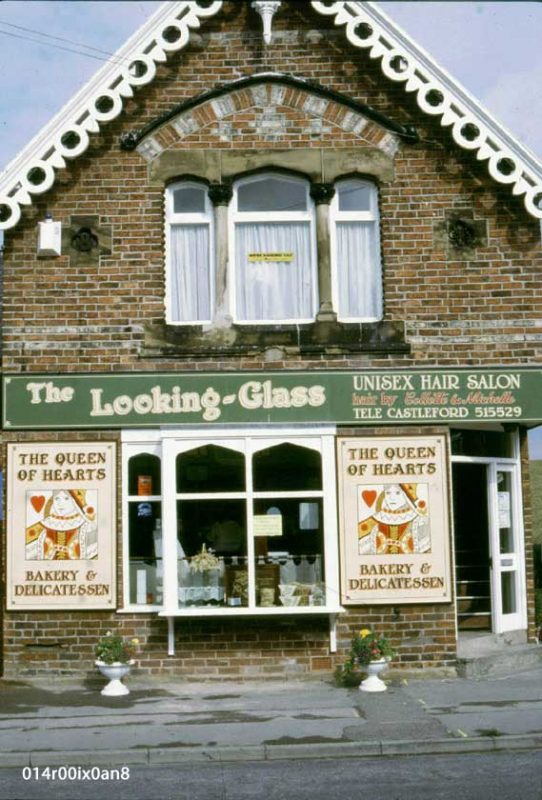 The Queen of Hearts Bakery and, above, the Looking Glass Hairdresser’s. Formerly Miss Radcliffe’s Bakery at the top of Holmes’ Yard.

Miss Edna Radcliffe closed her shop in the early 1970s and from 1973-85, the upper floor, after alterations, became a hairdresser’s shop, Marcelle’s, (Mrs. White’s). The property changed ownership in 1985 to the Gallagher family. In March 1985 the upper floor became ‘The Looking Glass’, the unisex hair salon of Colette and later Colette and Michelle Gallagher.

In May 1986 the old groundfloor shop premises were refurbished and re-opened as ‘The Queen of Hearts’ bakery and delicatessen by Mrs. Gallagher. It was reminiscent of the former bakery, though no baking was done on the premises but was bought in from a multiple firm, – ‘Malcolm’s’.

The Queen of Hearts closed at the end of October 1994 and the shop was converted into a hairdressing salon by Mrs. Gallagher, opening the beginning of December, 1994. When the hairdressing moved to the groundfloor, the upstairs was made into a self-contained flat.

On the immediate right are the shutters of the Post Office window, hanging from the wall; the front room window of the family part of the property; the Post Office door and window; the old cottage with its low wall and iron railings on top, and the gents outfitters shop with its box-bay window, that of Mr. Francis Crewe.

Children are playing at the top of Holmes’ Yard, round the gas lamp, – a frequent village scene. Miss Radcliffe’s shop is there with corner door and shuttered window. Beyond are the old cottages, which were very low and people went down a small step into them, (now demolished and later the site of the entrance to a car repair workshop). 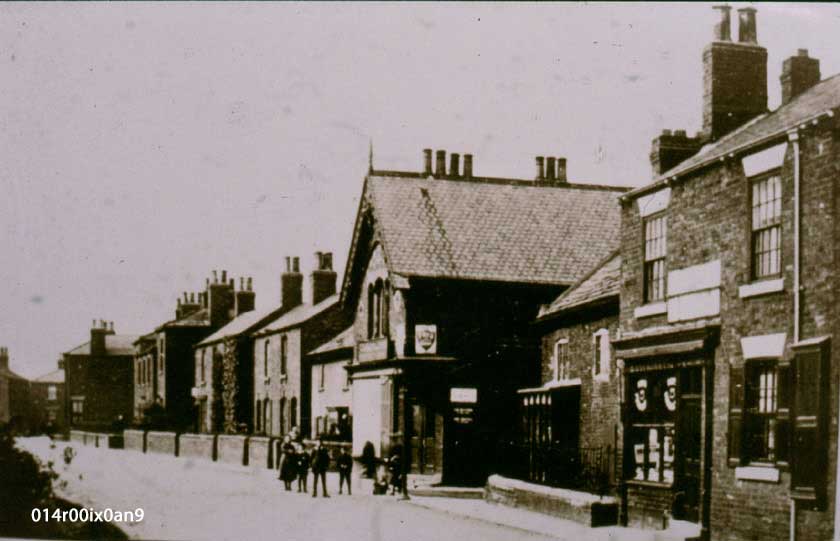 There are two houses beyond, 40 and 42, and Ivy House. The end room of Ivy House was used by Barclay’s Bank for a morning session. In the yard behind Ivy House and Nos 40 and 42 Main Street, P.J.Parrott, the village building firm, had their yard and joiners and undertakers workshop. The firm went into liquidation in 1967.

The taller properties beyond the yard were first a village fish and chip shop, next two private houses, the larger of the two said to have been a small village school. Beyond that is the gable of the two houses which stood at the top of Hicks ( Skinner) Lane, frontage faced onto Main Street. They had their own yard at the rear and there was also a row of houses down Hicks Lane, on the left side going down. Beyond these houses at the top of Hicks Lane was Wright’s small shop, the small cottage, the barber’s shop, then Stocks Hill.

Across the road at the rear of the photo is the front of the Malt Shovel Inn (which stood approximately where the Community Centre now stands). On the left of this is the ‘Bank House’ as it was called; maybe a Bank was here at one time. NB. No other properties on the left of Main Street.