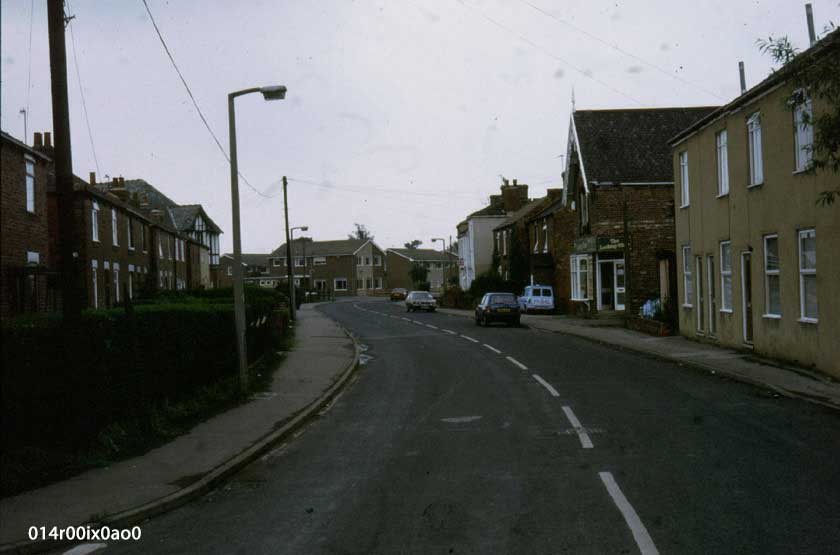 We are looking up Main Street from St. Margaret’s Avenue.

On the left are houses built in 1924 on former wasteground, then the gable of the Miners’ Welfare Institute, the Community Centre and the flats beyond.
On the right are the three houses converted from the Co-op grocery dept. and butchery dept (earlier the former Post Office).

The Co-op closed in 1976. The property was later bought by Mr. T. Hodgson and, as can be seen, vastly altered into one large house and 2 smaller ones. The two low cottages at the top of Holmes’ Yard are hidden from view, then the corner door of the Queen of Hearts delicatessen and box-bay shop window, older renovated properties beyond, then plaster-rendered building and village fish and chip shop.

It stands down Holmes’ Yard on the left hand side. The chapel closed as a place of worship 1959/60. It was often known as the Zion Chapel or the Freechurch. It was an independent chapel – had no minister. The congregation was responsible for services and maintenance. There was another United Methodist Chapel at Scholey Hill linked to this.

Before this church was built its members met for worship in the house of Mr. D. Wilson, in an old cornmill (property of Mr. Atkinson and Mr. Ripley) and in the slaughterhouse of a local butcher (Mr. Joseph Spink). This was the property that stands at the junction of Pit Lane and Main Street and later became Braime’s. The men of the congregation scrubbed out the slaughterhouse on Saturday evenings ready for the Sunday Services.

The land on Holmes’ Yard was bought from Mr. Holmes (who owned the property at the top of the yard) for £100 in1863, and the church was built that year, all the necesary money being raised or donated from Friday night collections and other gifts by the congregation. Not a penny was borrowed.

Beyond the chapel can be seen the gable of the Sunday School, built in 1867.
In the rear is the front of a large house lower down Holmes’ Yard that faced up towards Main Street. Lower down were two rows of smaller houses and one large house, all built and owned by Mr. Holmes – 14 cottages, built 1862-63. They were sold to the Earl of Mexborough in 1891. 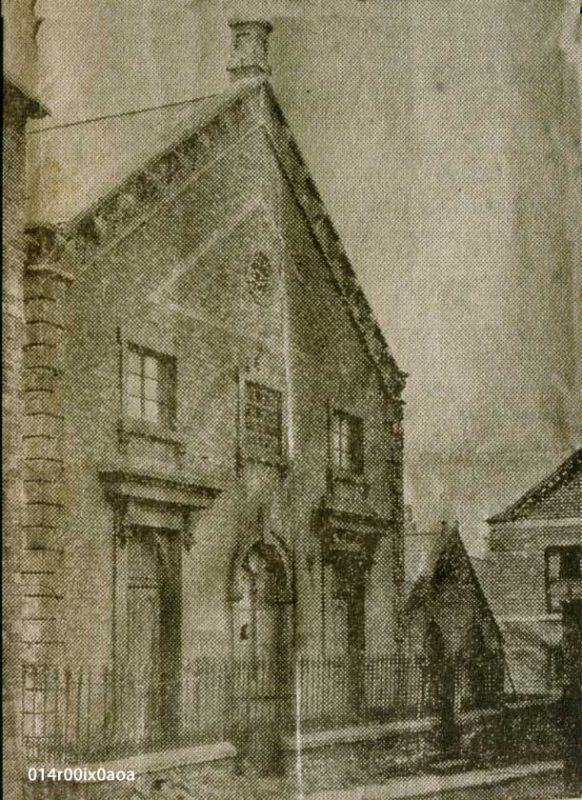 Like all village chapels, the Sunday School Anniversary was one of the highlights of the year, always well attended. It is said one had to go an hour before the service to make certain of a seat; many sat on the interior steps.

Because of dwindled congregations the chapel closed 1959/60. The Sunday School premises were demolished as were houses down Holmes’ Yard. The Chapel building became the joiner’s workshop of P.J. Parrott, the local building firm.

When the firm went into liquidation in 1967 the property was later taken as a car workshop by Mr. Ian Platt. It is said that at one time some tenants were evicted from their homes in Holmes’ Yard by Lord Mexboro’ because they joined a trades union (maybe a miner’s union), and they and their families took refuge in the chapel Sunday School.

Later some bought glebe land, ie. land which belonged to the Church, in Oaksfields and in 1895 became the occupants of the new houses built on the 1/4 acre plots they had purchased.