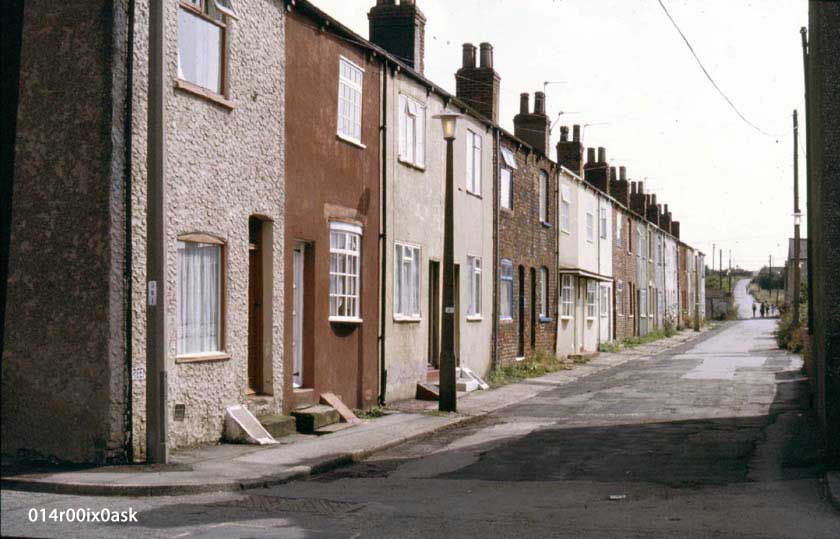 This is the front view of Green Row (Long Row) in 1982. This row stood at right angles to the main A639 road, going up towards the hill. The other four rows were parallel to the A639, one of them at the main roadside. All the rows were built by the first colliery owners of Junction Pit, the Burnley family, and indeed one row was called Burnley Row. (The other rows were Front Row, Low Row, and Middle Row). The houses were later bought, along with Junction Pit, by Henry Briggs and Son Co. Ltd (1860) and later by the National Coal Board. Finally they were sold privately to sitting tenants.

The Junction, so called because of the junction of railway lines here. The Lancashire and Yorkshire (L&Y), the Great Northern (GN) and the North Eastern (NE) having a joint running line with running rights on the adjacent Midland line. This was once a very thriving and closely knit community, with different generations of families living adjacent to each other.

At the bottom of Green Row, or Long Row as it was often called, there was a small shop. For many years it was kept by the Beards family and later by the Pritchards. Beards’ had a newsagent’s in this shop in about 1910. In those days Mrs. Beards, a widow, walked to Castleford and bought evening papers from a wholesaler there, walked back to Methley and then delivered papers.

Later the shop became an agency and newsagents in its own right. As well as selling newspapers it was also well stocked with groceries, drapery and hardware, and also old patent medicines such as Indian Brandee, sweet nitre, syrup of squills and ipepechuana wine.

At the road end of Burnley row, ie. the first parallel row up the hill, was another shop, chiefly selling groceries. For many years Moores kept this shop. In between Low Row, which stood on the main roadside, and Burnley Row was a Primitive Methodist Chapel, erected in1875, the architect being Thomas Howdill. It closed in the 1930s and was later taken over by the Salvation Army. Nearby was a Reading Room and, nearer Low Row, a fish and chip shop. Hence the Junction was a self-contained community, with mine, railway station and shops.

The mine was at the top of Junction Hill, the Lancashire and Yorkshire Railway Station half way up the hill and the London North Eastern and Great Northern station higher up the hill. Henry Briggs, the owner of the colliery and the houses, was a very autocratic employer, adverse to Trade Unions, and in 1862 evicted 41 colliers and their families from their homes at Methley Junction because they
had joined the Union.