By Mr. John BECKETT, at the house of Mr. John Sissons, the Royal Oak Inn, at Woodrow in Methley, in the west Riding of the County, on Wednesday, the Twenty-sixth day of December next, at Four o’clock in the Afternoon, subject to Conditions to be then and there produced, unless previously disposed of by Private Contract, of which due Notice will be given;

ALL that well-known and accustomed INN, called the ROYAL OAK INN, situated at Woodrow, in Methley, in the West Riding of the County of York, together with the Brew-house, Stables, Shed and all other necessary and requisite Out buildings, Conveniences, and Accommodations thereto attached, now in the Occupation of Mr. John Sissons.

And also, all those SEVEN MESSUAGES or DWELLING HOUSES, one of them occupied as a Grocer’s Shop adjoining thereto, in the occupation of Thos.Holdsworth, Jacob Morley, Mary Slack, Benjamin Brethrck, George Crooke, Benjamin Wood,and George Smith; with the Vacant Ground in front of and behind the said Inn, and Dwelling Houses.

The above Property is all Freehold, (except One House in the Occupation of Thos. Holdsworth) and Twenty Perches Of Land, which is Copyhold, unconspounded for, held of the Manor of Methley.

The Whole of the Premises have been lately rebuilt and are in excellent Repair. The Inn is very eligibly situated, at about an equal distance between the Towns of Leeds and Pontefract, and on the direct road from London to Leeds. The Mail and other coaches to all parts of the Kingdom pass the House daily, and from the great and increasing business and traffic on the road this property presents a very favourable Opportunity to any One wishing to embark in the business of an Innkeeper or Maltster.

The North Midland railway will pass within a very short distance of the above premises.

Mr. Thomas Pepper, of Metley, will show the Premises, and further Particulars may be had on Application to Messrs. HENRY LUMB & SON, Solicitors, Wakefield.November 28th, 1838. 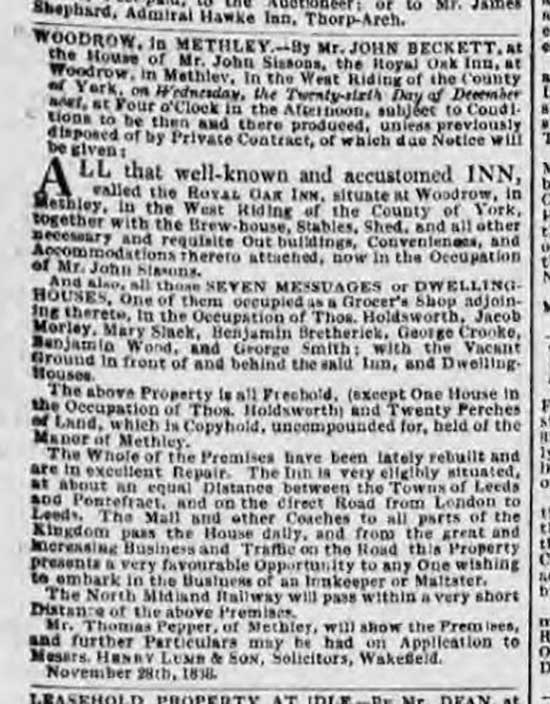 WHAT IS A MESSUAGE?

In law, a messuage is an archaic term used in conveyancing, and is “nearly synonymous with dwelling house. A grant of a messuage with the appurtenances will not only pass a house but all the buildings attached or belonging to it, as also its curtilage, garden and orchard, together with the close on which the house is built.” At one time “messuage” had a more extensive meaning than that conveyed by the words house or site, but such distinction no longer survives. A capital messuage is the main messuage of an estate, the house in which the owner of the estate normally lives. The word messuage derives from the Anglo-French mesuage. It is probably a corruption of popular Latin mansio, whence modern French maison, from manere.