The Second Girl’s Body Recovered From The River

Yesterday afternoon, a boatman named Haley, whilst near to the “Dandy” bridge, Whitwood Mere, recovered from the river Calder the body of Miss Janet (Jessie) Appleyard (23), daughter of Mr James Appleyard, glasshand, Wilson Street, Castleford, who had been missing since Sunday night, February 23 last.

It will be remembered that this was the second case of mysterious disappearance at Castleford. The first young lady’s body (Miss Beatrice Taylor) was recovered a week last Thursday, after being in the water six weeks, and an open verdict was returned. Miss Appleyard was last seen outside the Primitive Methodist Chapel, Bradley Street, Castleford.

She had been talking to a young lady named Phipps, who left her on the approach of a young man with whom deceased desired to speak. Miss Phipps expected she would follow her shortly afterwards into the service, which, however, she did not do. She seems to have walked away from the chapel, and was not seen again. Her gloves and neck fur were found the following morning near to Methley Bridge, and it was surmised that her body was in the river Calder. 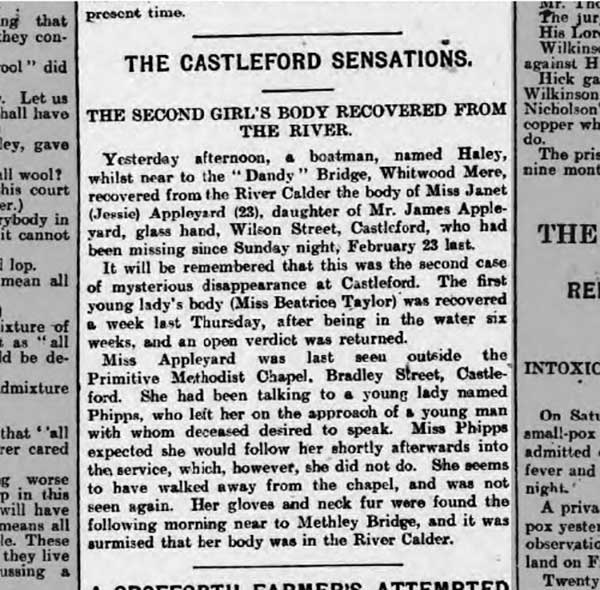