With Halloween (or Hallowe’en – a contraction of All Hallows’ Evening) just around the corner and the Methley Archive talk on ‘The Templars’  fast approaching, now seems the ideal time to entertain you with our own special, Methley based, ghost story.

But first, a few facts about the celebration;

The origins of these celebrations however date back thousands of years, to pagan times. Essentially a farming and agricultural people, the Pre-Christian Celtic year was determined by the growing seasons and Samhain marked the end of summer and the harvest and the beginning of the dark cold winter. The festival symbolised the boundary between the world of the living and the world of the dead.

It was believed by the Celts that on the night of 31st October, ghosts of their dead would revisit the mortal world and large bonfires were lit in each village in order to ward off any evil spirits that may also be at large. Celtic priests, known as Druids, would have led the Samhain celebrations. It would also have been the Druids who ensured that the hearth fire of each house was re-lit from the glowing embers of the sacred bonfire, in order to help protect the people and keep them warm through the forthcoming long, dark winter months.

Throughout Britain, Halloween has traditionally been celebrated by children’s games such as bobbing for apples in containers full of water, telling ghost stories and the carving of faces into hollowed-out vegetables such as swedes and turnips. These faces would usually be illuminated from within by a candle, the lanterns displayed on window sills to ward off any evil spirits. The current use of pumpkins is a relatively modern innovation imported from the United States.

IS THERE SOMETHING STRANGE ABOUT TEMPLAR HOUSE?

At first sight the house looks ordinary enough. A substantial small country house of darkening brick, age uncertain, but looking about two hundred years old. And yet there are people in Methley who regard Templar House, Woodrow with the deepest suspicion; some are reluctant to enter it even on brief visits. Not everyone is willing to give reasons for the feeling, but others dont hesitate; they will tell you that Templar House is haunted by the ghost of a ‘Grey Lady’.

We asked Frank Backhouse, who with his wife has lived in the house now for about 22 years, what he thought of the stories. Despite the fact that they have never actually seen a lady in grey as an univited visitor to their home, the Backhouses take the haunting story seriously.

Some years ago they saw wisps of what appeared to be grey smoke or vapour where such things had no right to be, and about five years ago they provided some friends with a disturbed dinner party. On this occasion five people were seated at a table in the dinning room when they heard distinct footsteps pass along the hall and up the stairs and into a bathroom. They investigated quickly suspecting an intruder, but found no trace of anyone.

Mr. Backhouse said that the history of the house goes back far beyond most of what is visible today. Old stone vaulted cellars are the remains of a pre-Reformation monastic house of the Knights of St. John of Jerusalem, and later the place was the home of the Hollings family who were influential in Methley life for fully three hundred years from Tudor times.

The ‘grey lady’ is said by some to have been a nurse to one of the Hollings’s, and that she met some violent end in the house, but there is no firm agreement about the details. Indeed some of the stories seem to be confused versions of another violent death story connected with the house which is now Churchside Farm, but which used to be the old Rose & Crown Inn at Methley.

Anyhow, so far as Mr. & Mrs. Backhouse are concerned, haunted or not, they are quite happy with their home, with its load of historical memories, and perhaps one extra resident who seems unwilling to show herself much in these sceptical days. 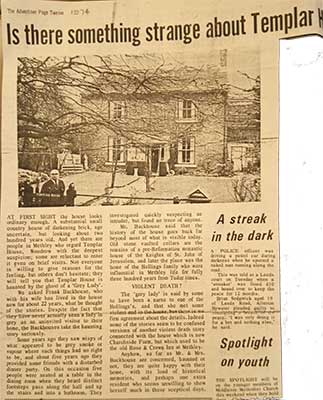