The party then drove to Methley Hall, the seat of the Earl of Mexborough, which the Queen had never previously visited. She was received by Lady Mexborough, in the absence of Lord Mexborough, who is in Scotland.

Others present were Viscount and Viscountess Pollington, Lady Sarah Savile, the Hon. John and the Hon. Charles Savile (sons of Viscount Pollington), and Miss Peggy Richardson, daughter of Mr. John S. Richardson, agent to Lord Mexborough. The party remained to tea, and the Queen was shown over the Hall, which is famed for its collection of family portraits, dating back several centuries, by Lady Mexborough.

After a stay of over an hour the Royal party returned to Harewood. 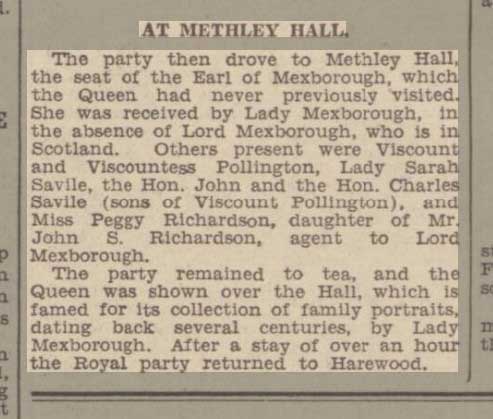