THE WATERGATE FLOODS – THE 60th ANNIVERSARY

Sixty years ago on Saturday November 26th 1960, exceptional and prolonged rain caused the River Calder to burst over its banks. Water quickly spread over the fields and for almost its whole length the Watergate area of Methley was flooded, in places to a depth of 13 feet.

The cottages in the central section of Watergate suffered most and householders there had to retreat upstairs before the rising water. When daylight came next day, they realised the extent and severity of the flood and feared being drowned. Luckily the alarm had been raised and rowing boats were brought from Pontefract and Roundhay Parks so that people could be rescued.

Normally we would have held an exhibition in the Community Centre to mark the anniversary, similar to the one we held on the 50th. Unfortunately these are not normal times, so we have to hold our exhibition in the ‘cloud’.

The extracts reproduced below are taken from personal recollections and newspaper reports from the time.

It may seem almost unbelievable today that an area the size of Watergate could be flooded by up to 13 feet of water, leaving the residents stranded and having to contemplate taking shelter on the roofs of their cottages. But this happened only 60 years ago – six years before England won the world cup and only three before rock legend David Bowie’s first hit song “Space Oddity”. 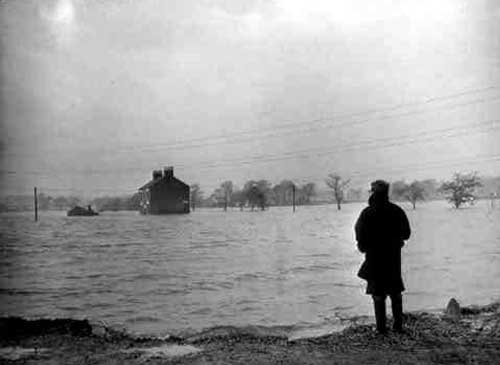 Looking at the flooded Junction Inn 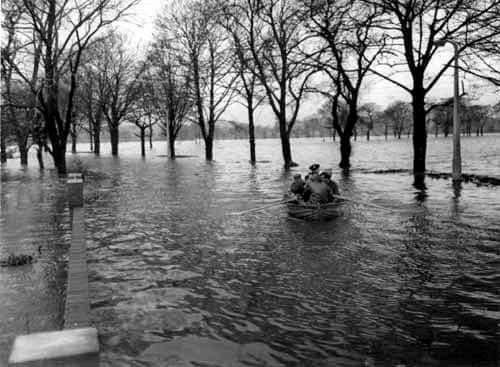 The only way to get home. 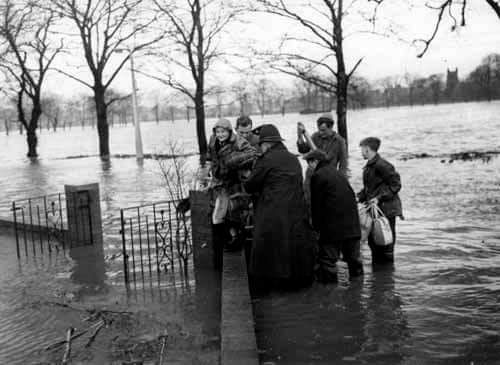 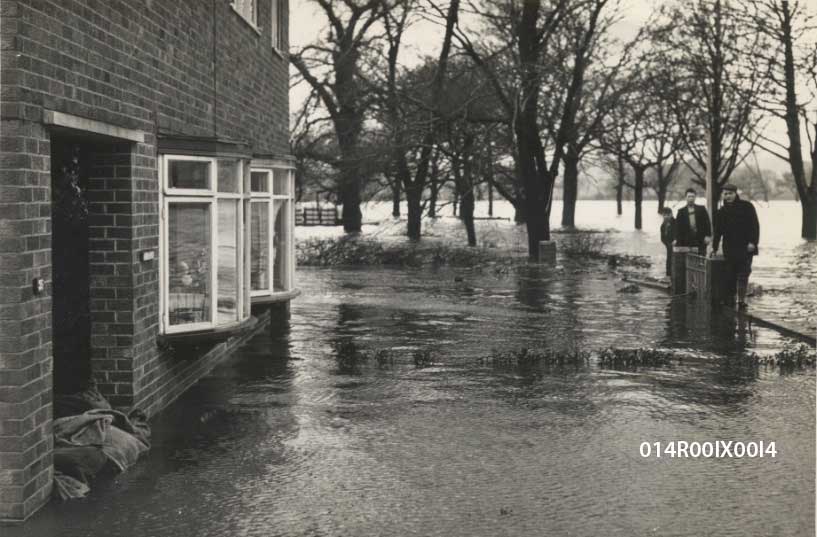 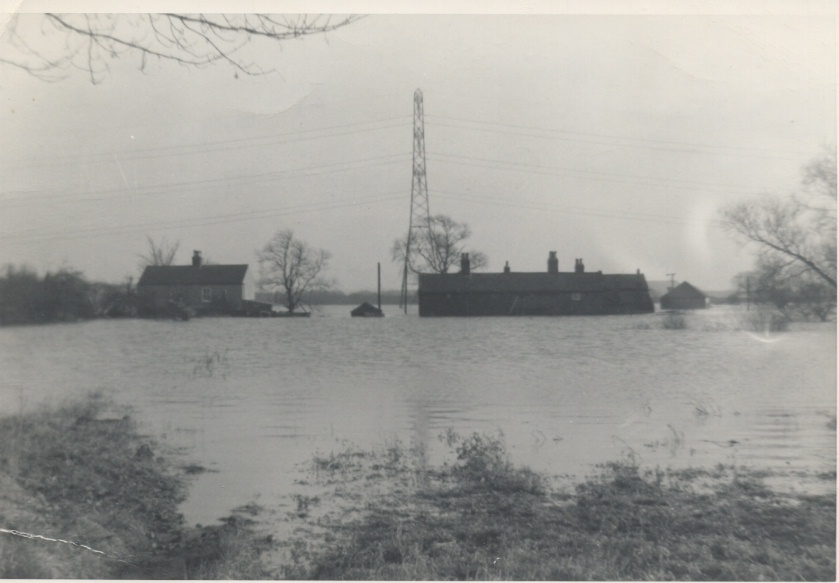 Watergate Floods with No. 48 on left. 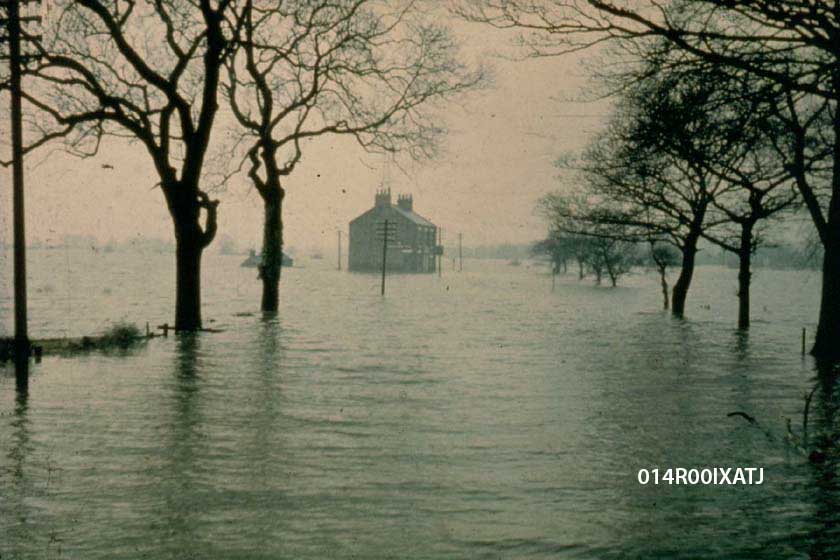 Watergate Floods and the Junction Inn. 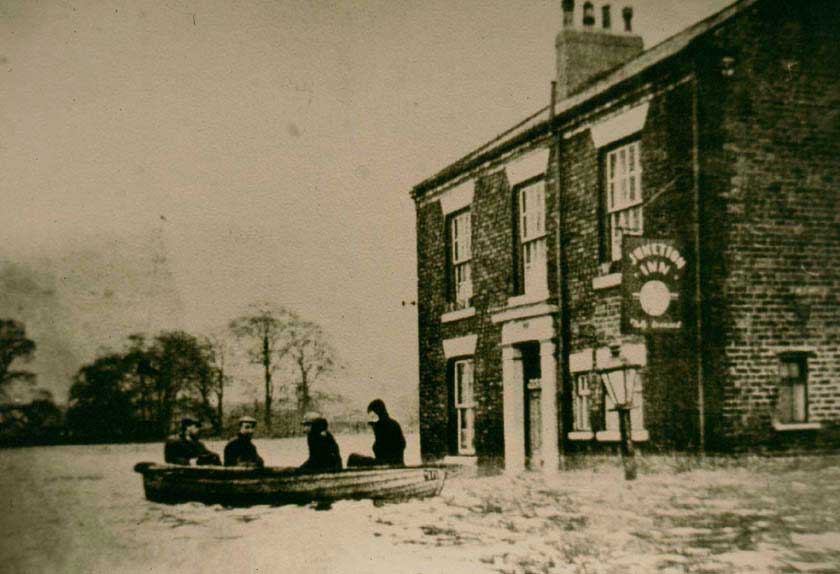 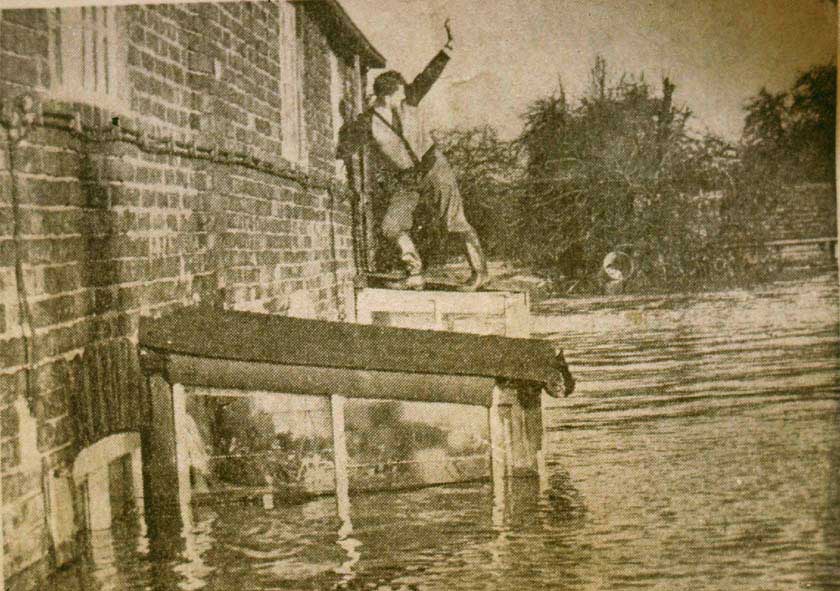 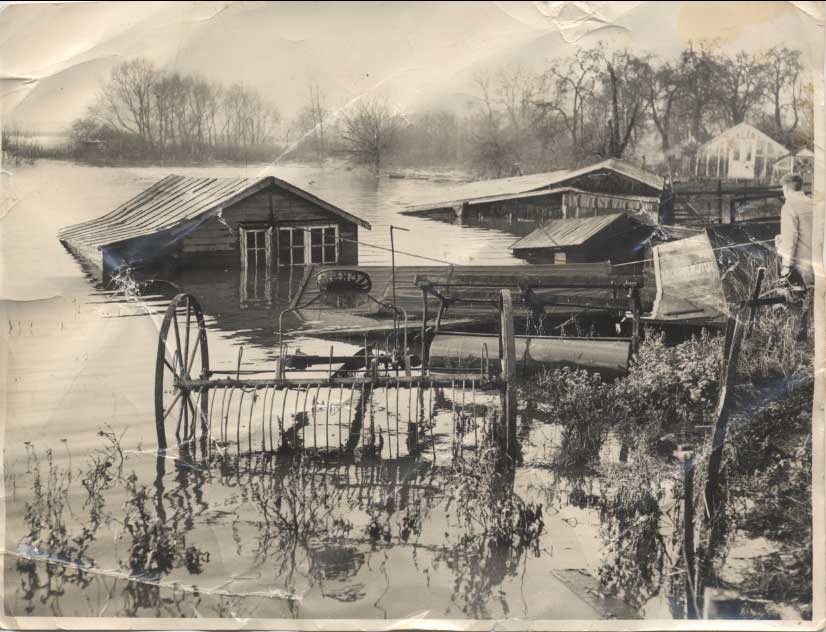 Turner’s Farm in the Floods. 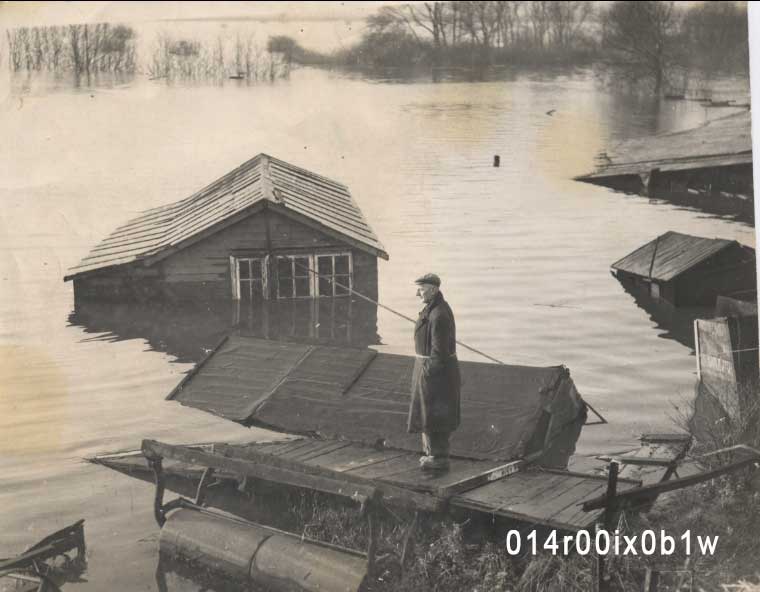 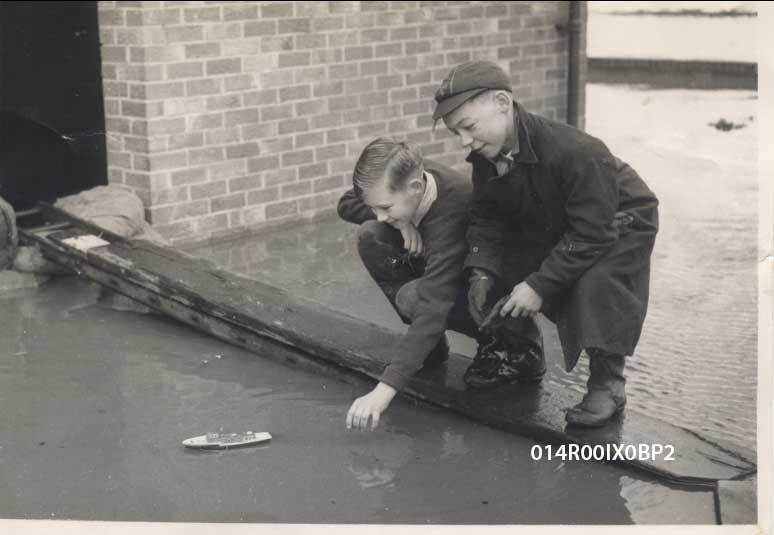 Keith Turner and Billy Wright play with a toy boat in floodwater near private house in front of Embleton estate. 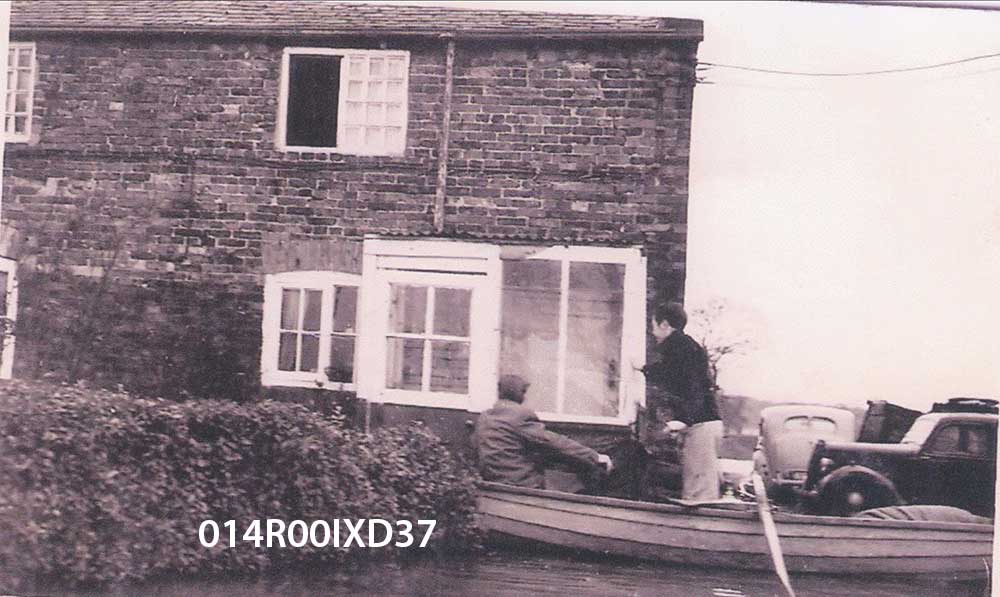 Tony Wolfenden visits his house as the Watergate flood recedes. 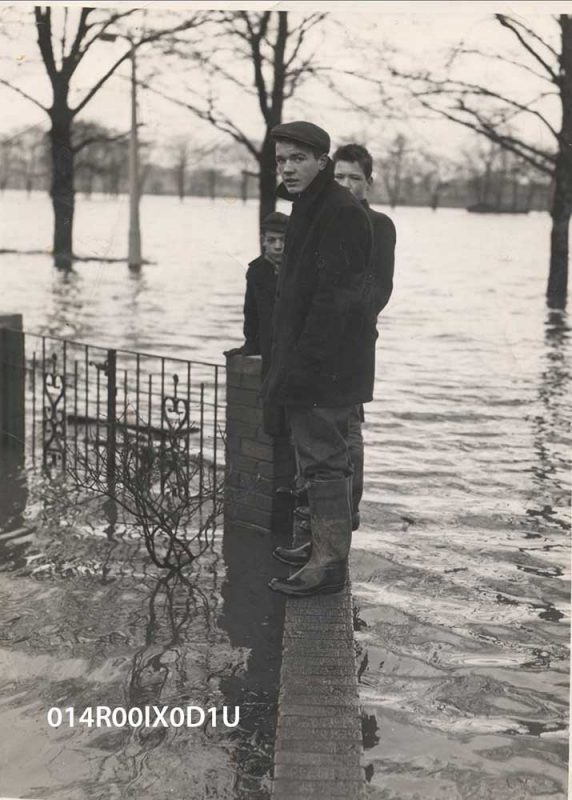 Watergate Flood near the private houses in front of Embleton Estate 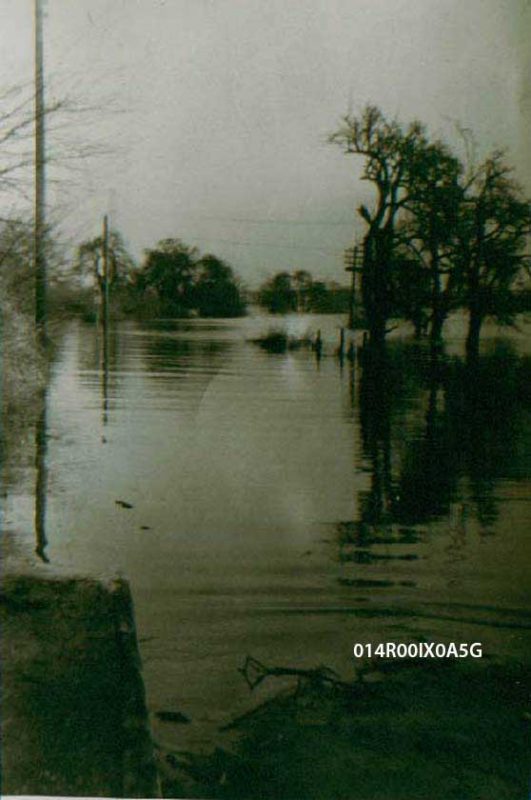 Watergate Floods, near the pumping station. 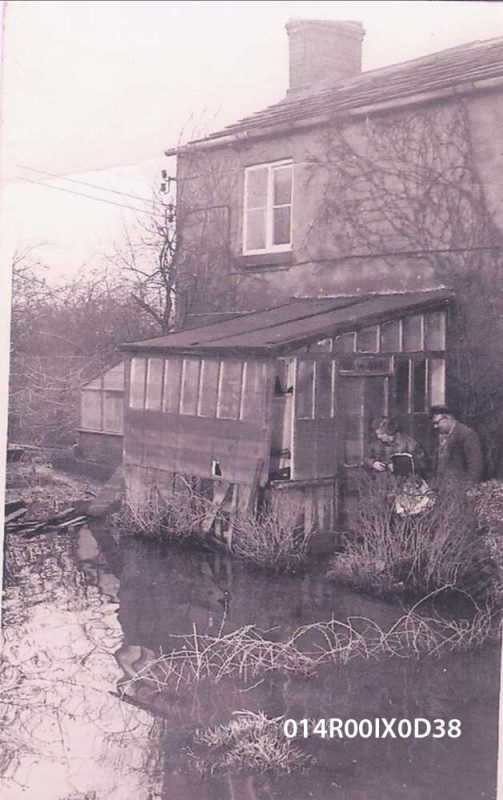 Tony Wolfenden visits his house as the Watergate flood recedes.

THE AFTERMATH – Cleaning Up 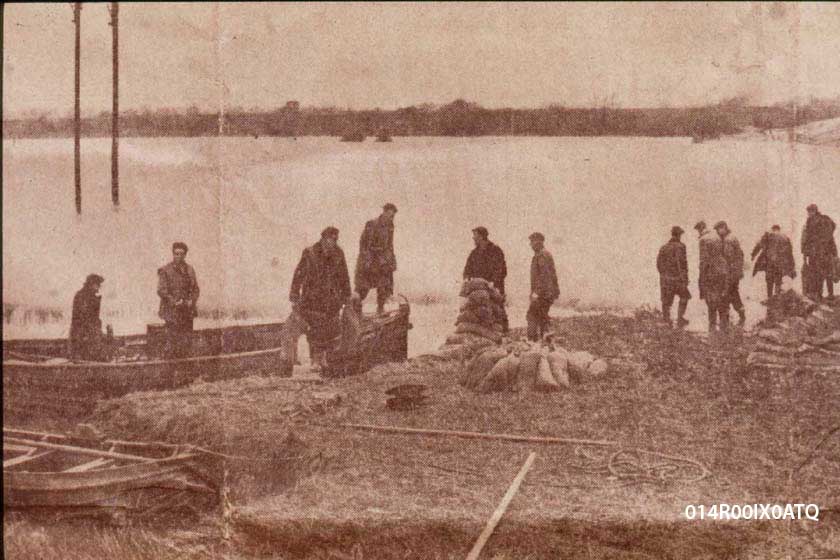 Repairing the breached river bank of the River Calder. 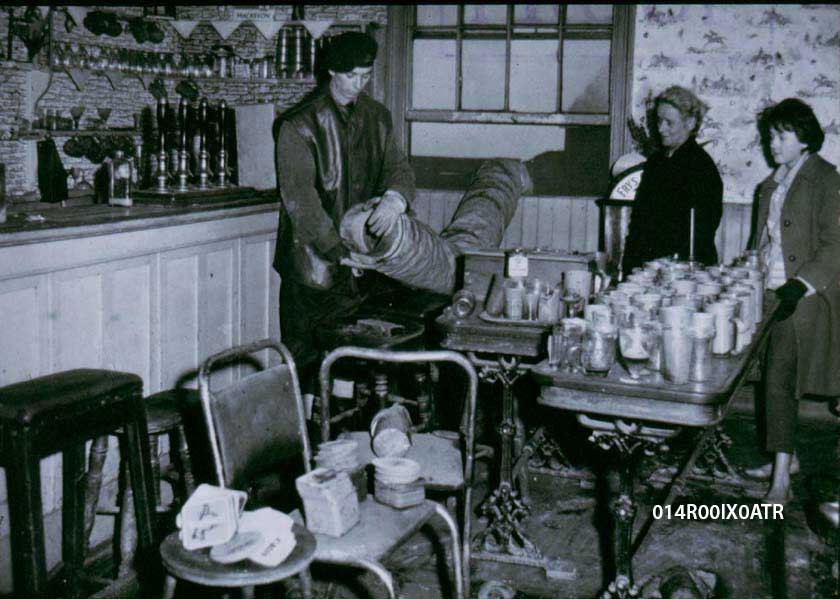 Drying out at the Junction Inn. 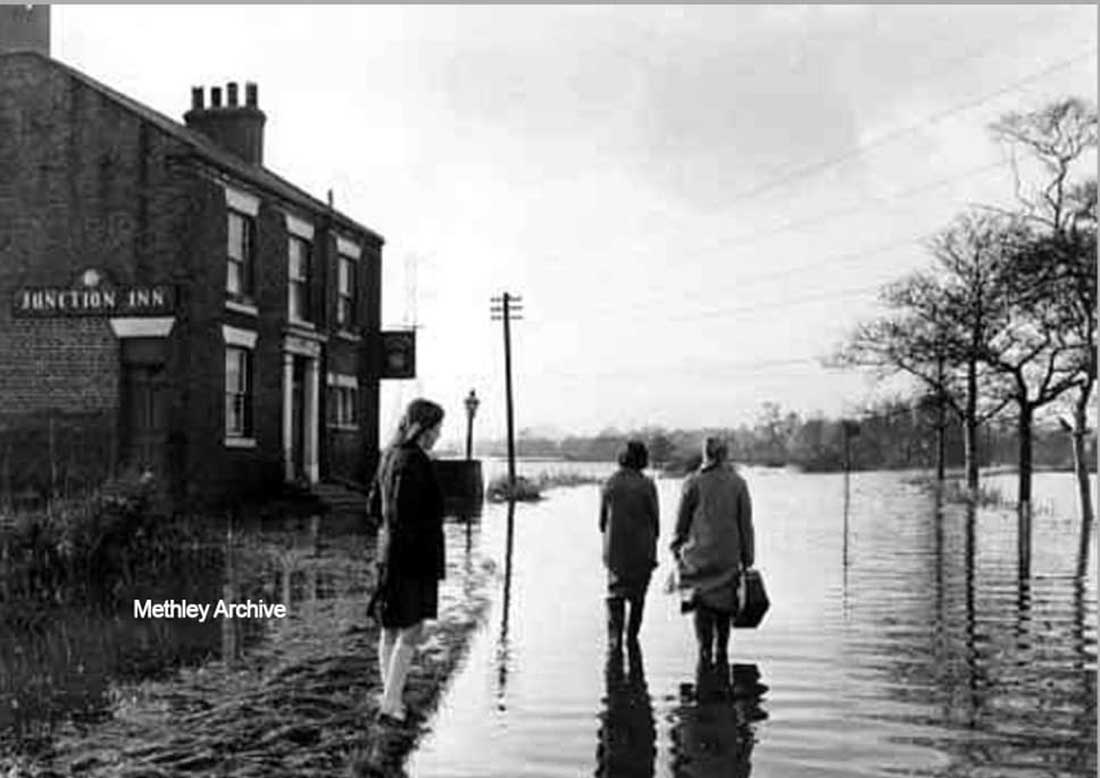 Catching the bus outside of the Junction. 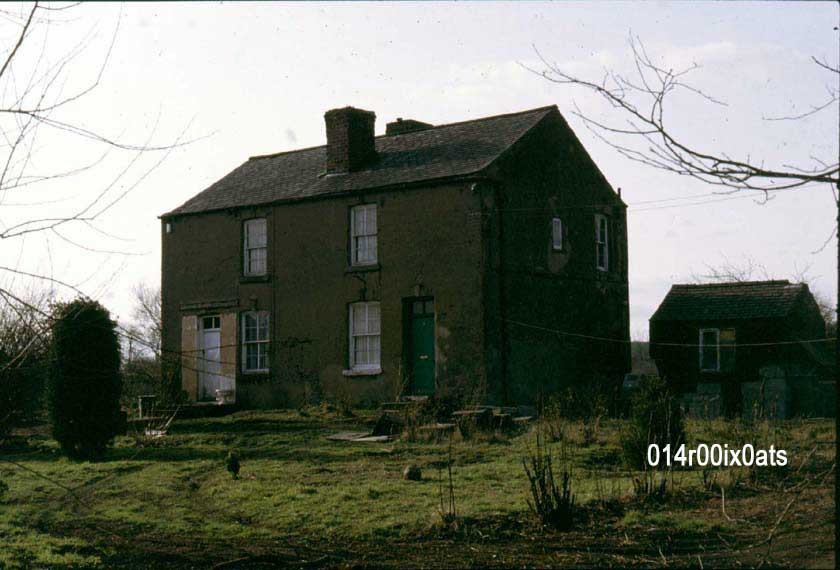 The aftermath of the flood at the Junction Inn was typical of that in all the flooded houses. Big dryers were used to dry out the rooms and the pub opened again after a month.

Many of the older cottages were demolished and the tenants moved to different parts of Methley. This photo shows two of the cottages which survived the flooding.

Reports From The Press

Mr. and Mrs. Charles Fletcher live with Mrs. Fletcher’s mother and father, Mr. and Mrs. Percy Wollard. Mr. Fletcher said: “This is the second time this year we have been flooded. Normally we get about 1ft. of water, and when the floods came in I put all the furniture in boxes and we went to bed. We did not expect it to be any worse than usual.

But by 1a.m. there was 3ft. to 4ft. of water. I went downstairs and lifted the furniture even higher, but within two hours the water had risen by 5ft. and was creeping up the stairs. It was too late to get out then.

By 6a.m. the furniture downstairs was banging against the ceiling, and by 8a.m. the water was coming into the bedrooms. Later, when we were planning our next move – on to the roof – Mr. Garland, who was exhausted, came swimming up, and I hauled him into the bedroom. He deserves a medal.

By the time the boat took us off there was over 3ft. of water in the bedroom. 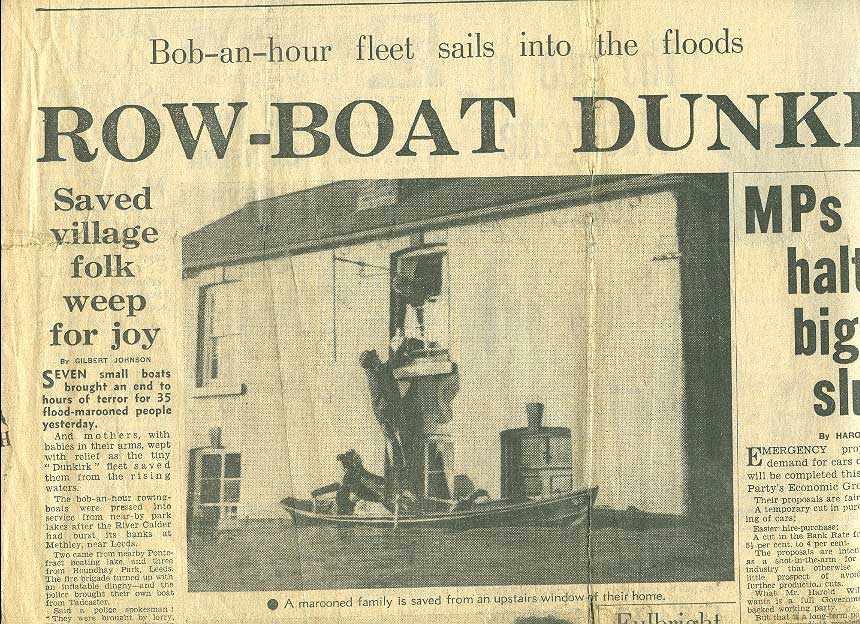 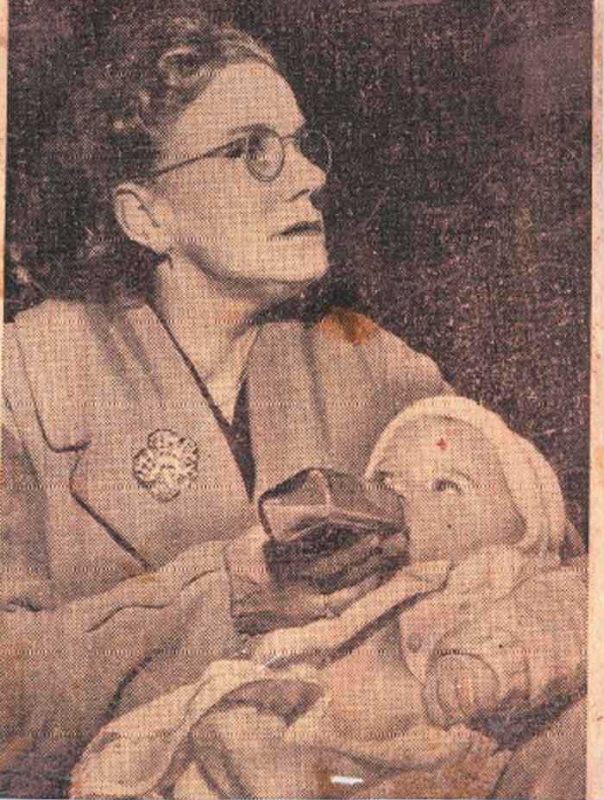 Among them, unhurt and smiling, was six-month old Colin Wolfenden with his parents Mr. and Mrs. Robert Wolfenden and brothers Tony, 14, and Jack, 17.

“The water was just beginning to come over the top stair when the rescue boat hailed us,” said Mrs. Connie Wolfenden. “We saw the pram floating in the kitchen. Everything else was under water. Fortunately there was some milk upstairs for the baby.”
Mrs. Eva Dodsworth narrowly escaped falling into the fast flowing flood as she lowered herself from her bedroom window. Mr. and Mrs george Bollard were taken off as water began to invade their bedroom.
News of the rescue fleet had been shouted from house to house.
But Mr. Cox with his wife Mary, their dog, Trixie, and the cat, Sooty, taken with them to their bedroom refuge, were too far away to hear the calls: “Rescue coming”.

Said Mr. Cox: “It was a nightmare. We didn’t know whether we had been forgotten or if help was on the way. All the time we were watching the water getting nearer and nearer the stairs top”. “Dry land seemed a long way off, and the water must have been 12ft deep. We had almost given up hope when we heard shouts and saw the boat on its way. We had been marooned for 12 hours.” 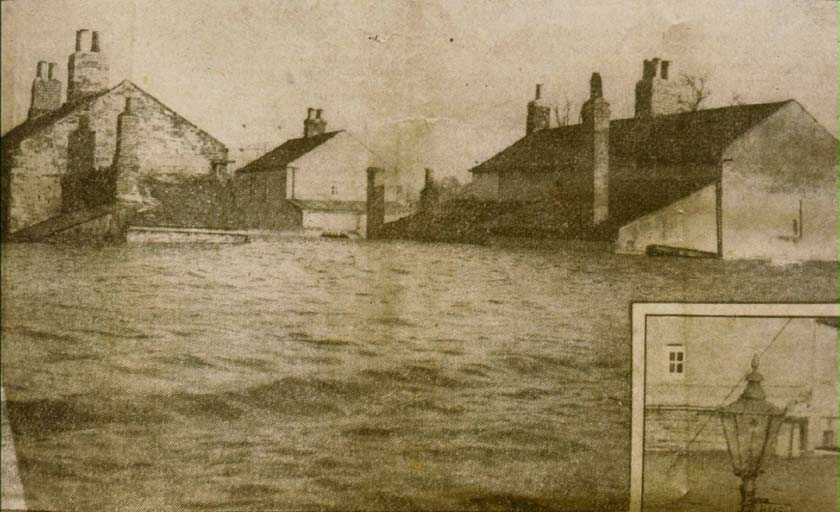 Cottages in Watergate, surrounded by floodwaters. 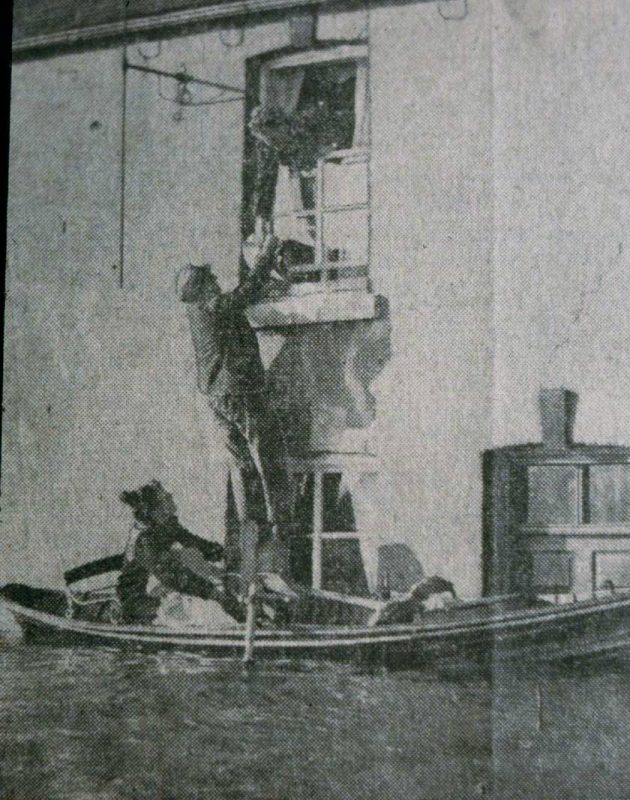 All through the night we could hear noise downstairs, things bumping about. I was dreadfully worried the old house would collapse. I could swim but mother could not. At daybreak we couldn’t believe our eyes. There was water everywhere as far as we could see. Floating on the water were rats, hundreds of them clinging to anything they could find – pieces of wood, bits of branches. Our small coal shed was afloat; they were clinging to that.

Mother and I looked out on a quiet watery world. Our next-door neighbour, who lived alone, was away and the end cottage was unoccupied. There were three cottages to the rear of ours but as we had no back windows we couldn’t see or hear them. We just had to sit and wait, calling for help. Was all of Methley under water we wondered? But that we didin’t know until help came, in the form of Mr. Peter Garland on a homemade raft. Wonderful! He said help was on its way.

What a blessed relief. Very soon after Peter’s reassurance, rowing boats arrived from Pontefract and Roundhay Parks. The police segeant and George and Michael Wheatley of Churchside farm manned our boat. One of them climbed through the bedroom window from the boat, to assist mother and me climb through the window. Mother was helped first and just as the policeman was standing in the boat helping her, the boat moved away from the house wall. Mother was left dangling over the boat, but the police sergeant fell in all 13ft. of water.

Eventually mother and I were lowered to safely and dry into the boat and rowed to dry land at the top of the fields near the church.

We were escorted to the Parish Hall for hot tea and from there we went by bus to my mother’s brother at Whitwood where we stayed for a month.